Find a Lawyer Near Me Referral Service

This Page Current as of 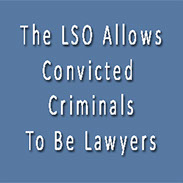 CONVICTED CRIMINALS TO BE LAWYERS.

WHY HAS THE LAW SOCIETY OF ONTARIO PUBLISHED AND REPUBLISHED A “NOTICE TO THE PROFESSION” CONDEMNING CANLAW?

The LSO/LSUC issued their defamatory, cowardly “Notice to the Profession” (their Fatwah)  to the legal profession in June, 2004 hoping to put CanLaw out of business to they could resume charging people for referrals.

1. Up until maybe 2005, the LSO (formerly LSUC) was charging consumers about $8 to obtain a lawyer referral

2. Consumers had to dial a 900 number for referrals and that system automatically charged the $8 fee to their phone bill. For this LSUC would provide the name of just one lawyer, usually the next lawyer on the list.

3. In 1996, CanLaw opened for business online and offered free referrals to anyone who asked.

4. In 1996, the LSO/LSUC grossed about $287,000.00 a year for their lawyer referral service based on their 1996 annual report which suggests that LSO put some major new program in effect in 1996 to maximize and generate new referral revenue and CanLaw’s emergence ruined their plans.

5. As a result of CanLaw’s success offering free referrals, the LSUC referral revenue plummeted and by 2004 it was virtually zero.

6. Shortly after that they dropped their referral service fee and offered free referrals.

7. The LSO/LSUC issued their “Notice to the Profession” (their Fatwah)  to the legal profession in June, 2004 hoping to put CanLaw out of business to they could resume charging people for referrals.

a. The Fatwah was based entirely on 4 extracts from anonymous emails allegedly quoting rude comments made by CanLaw.

b. The Fatwah was published in Ontario Reports, the Globe and Mail, Lawyers Weekly, Canadian Lawyer, elsewhere and online. It is still posted on the LSUC web site and widely copied on the internet. It was been republished by the media in 2017

c. There is not a month goes by that someone does not throw this in our face.

8. At no time has the LSUC permitted CanLaw to respond to their accusations. No hearing was held. When CanLaw served a Libel Notice in July 2004, the LSUC responded by threatening that “WE WILL CRUSH YOU.” All attempts to meet with them over the past 16 years have been ignored.

9. CanLaw and Kirby Inwood categorically deny sending the email snippets in the LSUC Notice to the profession. Their false accusation was just an excuse to attack and hopefully destroy CanLaw primarily to enable them to return to charging for referrals.

This is the heading on the LSO web site

DISCIPLINE HEARING REPORTS ISSUED BY THE

Shows how the Law Society discipline of lawyers is a farce and a fraud. You really should read about this, if you deal with any lawyer.

The LSO Considers 4 anonymous, false allegations that CanLaw was rude sometime between 1996 and 2004  to be worse than these examples:

Here are just a few examples of the many Lawyers who were Disbarred, then Reinstated

Law Societies protect lawyers from consumers. They do not protect consumers from lawyers.

Includes a free back

link to your web site

The LSO/LSUC issued their “Notice to the Profession” (their Fatwah) to the legal profession in June, 2004 hoping to put CanLaw out of business to they could resume charging people for referrals..

Find Lawyers In Your Town

WHAT IS CANLAW? CanLaw is Canada's first, largest, free Nationwide Lawyer Referral Service for anyone, or any business, anywhere in the world, needing to Find a lawyer, law firm, or legal or related services and assistance for any reason whatsoever, anywhere in Canada.